Facebook Messenger is getting a new feature. This time it's audio emoji, which when tapped will trigger audio. The new feature is called Soundmoji and can be found under the speaker icon in a chat with a particular user. The feature was announced to mark World Emoji Day. July 17 marks World Emoji Day. Facebook revealed that every day, Messenger users send an average of 2.4 billion messages that contain emoticons. For this reason, the company decided to prepare a new feature. Facebook Messenger gets emoji that can play sounds. The feature has been called Soundmoji. It can be accessed from the smiley face and then by tapping the speaker. You can see it in the video below. Users will be able to disguise themselves with different Soundmoji. These include hand claps, snare drums, crickets, or a sinister smile. But it doesn't stop there, as Facebook also lets users choose audio clips of artists and TV shows and movies, such as Universal Pictures' F9, NBC and Universal Television's Brooklyn Nine-Nine, and Netflix and Bridgerton of Shondaland. The novelty is already being rolled out to the Messenger app. However, its full implementation may take some time. It is worth mentioning that the Android version of Messenger has already had over 5 billion downloads.
🎂😊 In 2021, World Emoji Day occurs on July 17
💬 17.07.2021

Nowadays, pictorial communication is increasingly important. We live in a world where almost all events can be described/commented with memes. Emoticons or emoticons are a similar example of graphic communication that is extremely common and has permeated everyday life. These distinctive smile, heart or animal icons even have their own holiday, which falls on July 17. Emoticons are used to highlight our emotions, but also to embellish a statement. A smiley face, a grimace, a kiss, a strained bicep, a rose, a pizza, a dog or hundreds of other images called emojis have become popular with the rise of cell phones, the Internet and social networking sites. Text communication is playing an increasingly important role in our world, so it's no wonder that someone came up with the idea to establish World Emoji Day. The holiday was created as a result of Jeremy Burge's initiative in 2014. People from all over the world consciously paste a mass of emoticons on this day, often using the hashtag #WorldEmojiDay in posts on Twitter, Instagram or Facebook. World Emoi Day is also an opportunity to present special awards, Internet users decide on the best new emoji, the most anticipated emoticon, or indicate the emoticon of the year. The whole event takes place in a very prestigious place, which is certainly the New York Stock Exchange - the largest stock exchange in the world.
⛎ 12 Signs of the Zodiac in Emoji, no wait... there is one more?
💬 15.07.2021

In Western astrology, astrological signs are the twelve 30 degree sectors that make up Earth's 360 degree orbit around the Sun. The signs enumerate from the first day of spring known as the First Point of Aries which is the vernal equinox. The Western astrological signs are Aries, Taurus, Gemini, Cancer, Leo, Virgo, Libra, Scorpio, Sagittarius, Capricorn, Aquarius and Pisces. The Western zodiac originated in Babylonian astrology, and was later influenced by Hellenistic culture. Each sign was named after a constellation the sun annually moved through while crossing the sky. This observation is emphasized in the simplified and popular sun sign astrology. Over the centuries, Western astrology's zodiacal divisions have shifted out of alignment with the constellations they were named after by axial precession while Hindu astrology measurements correct for shifting. Astrology has developed in Chinese and Tibetan cultures as well. In Emoji we can find 13th sign of the Zodiac. What is that last one? ⛎ It's Ophiuchus. Ophiuchus is one of thirteen constellations that cross the ecliptic. It has therefore been called the "13th sign of the zodiac". However, this confuses sign with constellation. The signs of the zodiac are a twelve-fold division of the ecliptic, so that each sign spans 30° of celestial longitude, approximately the distance the Sun travels in a month, and (in the Western tradition) are aligned with the seasons so that the March equinox always falls on the boundary between Pisces and Aries. Constellations, on the other hand, are unequal in size and are based on the positions of the stars. The constellations of the zodiac have only a loose association with the signs of the zodiac, and do not in general coincide with them. In Western astrology the constellation of Aquarius, for example, largely corresponds to the sign of Pisces. Similarly, the constellation of Ophiuchus occupies most (29 November – 18 December[36]) of the sign of Sagittarius (23 November – 21 December). The differences are due to the fact that the time of year that the sun passes through a particular zodiac constellation's position has slowly changed (because of the precession of the equinoxes) over the centuries from when the Babylonians originally developed the Zodiac. Learn more at Wikipedia.
💛❤️ Snapchat Emoji Meanings
💬 11.07.2021

Today we are deciphering all the emoticons we can see on Snapchat next to our friends names. 💛 Yellow heart - You are #1 best friends with each other. You send the most snaps to this person and they send the most snaps to you. ❤️ Red heart - You have been #1 BFs with each other for two weeks straight. 💕 Pink hearts - You have been #1 BFs with each other for two months straight. 😎 Face with sunglasses - One of your best firends is one of their best friends. You send a lot of snaps to someone they also send a lot of snaps to. 😬 Grimacing face - Your #1 best firend is their #1 best firend. You send the most snaps to the same person that they do. Very awkward... 😏 Smirking face - You are one of their best firends... but they are not a best friend of yours. You don't send them many snaps, but they send you a lot of them. 🙂 Smiling face - Another best firend of yours. You send this person a lot of snaps. Not your #1 best firend, but they are up there. 🔥 Fire - You are on a Snapstreak! You have snapped this person every day, and they have snapped you back. Increases with number of consecutive days. 💯 Hundred points - 100 Day Snapstreak. The 100 emoji appears next to the fire when you snap back and forth with someone for one hundred days in a row. 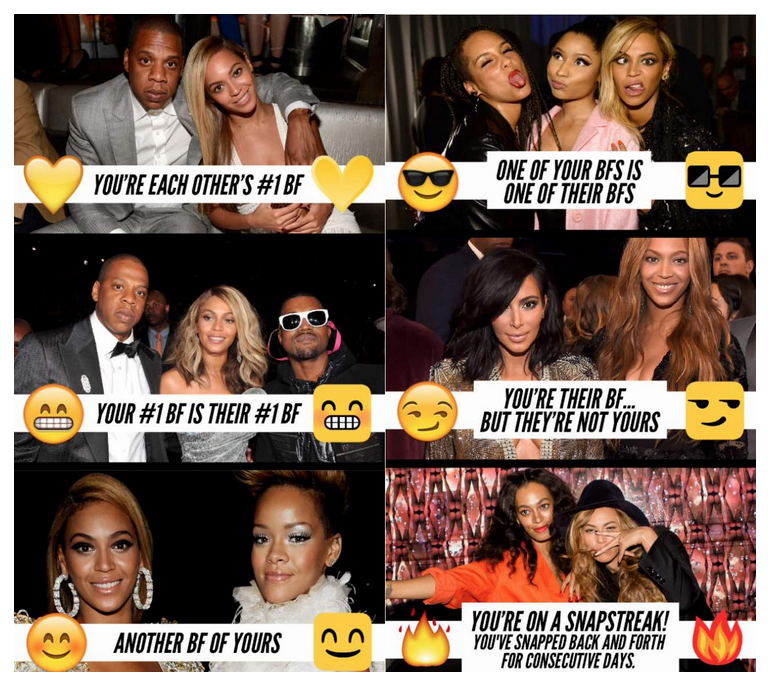 Assuming you're a Twitter regular, you may have noticed that the combination of these two 🐸☕️ emoticons appears overly often. But what does it actually mean? A frog in conjunction with hot beverage symbolize the "But that's none of my business" meme using emoji. It's a sarcastic expression used as a postscript to an insult or disrespectful remark said towards a specific individual or group. The phrase was popularized through an image macro series fraturing Kermit the Frog from The Muppets and punchline poking fun at a wide range of faux-pas and questionable behaviors in everyday social situations.

You can use "Copy" button above to copy this emoji combination directly into your clipboard.
« 12 »